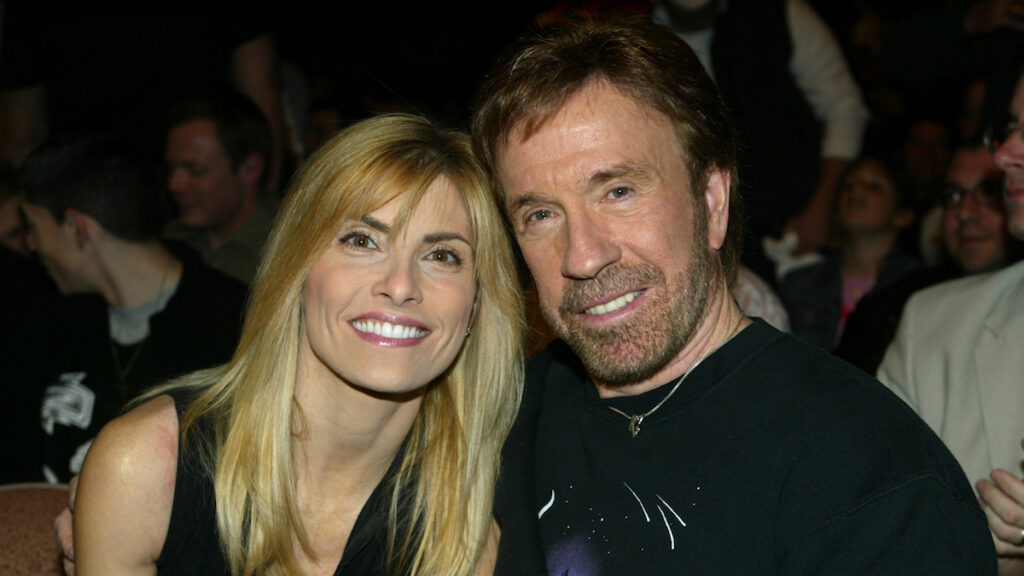 No one knows how it happened, but at some point over the last fifteen years, the actor, born Carlos Ray Norris, became the subject of widespread humour and absurd comedy that still haunts his reputation to this day. Many millennials and Gen-Z members might not even be that familiar with the extent of Chuck’s body of work or how he built his reputation as one of the most skillful, charismatic martial arts performers in Hollywood.

Chuck Norris is a legend, not only in the context of his extraordinary accomplishments on-screen but also in how nobody really knows about the intricate details of his personal life. There’s a reason why he disappeared off the face of Hollywood, and it’s a stark contrast to the stiff, hard-as-nails public persona he had spent decades cultivating.

Chuck Noris has been married to former model Gena O’Kelly for over twenty-two years. The pair met in 1997 when Chuck did a small role in a television series featuring Gena. The two hit it off, and he invited her to Dallas, Texas, to spend more time with him. Gena is twenty-three years junior to Chuck, yet the age difference never deterred them from pursuing a romance with one another. They walked down the aisle on November 28, 1998, and welcomed a pair of twins on August 30, 2001.

The complications began in 2013 when Gena decided to undergo an MRI scan to examine her rheumatoid arthritis. She claimed that she had been administered an unsafe injection, a “contrast agent,” before her scan, which allegedly triggered several debilitating symptoms in her body. This continued for two successive scans, after which she felt “extreme burning.”

Gena recalled frequently waking up her husband in the middle of the night to tell him that “there’s something terribly wrong” with her. They would rush to the hospital to get emergency treatment, but the doctors claimed no responsibility for the situation and instead told her that she was perfectly healthy. They didn’t see a need to put her on an IV drip or prescribe pain medication, so the burning only kept “spreading.”

The family kept seeing doctors incessantly to try to find a fix for Gena’s worsening condition.

I just lay in bed on an IV for five months and had to have round-the-clock nursing care. Chuck slept beside me on the couch and never left. I prayed that I would live to raise my children.

In addition to the chronic burning, Gena reported “horrible brain damage,” articulation and memory issues, muscle wasting, and being hypermetabolic to the point that her entire body was just “tremoring.” It wasn’t until Chuck sought out an integrative doctor in Reno, Nevada, that Gena got effective, targeted treatment for her condition.

Chuck and his wife alleged that their whole ordeal was caused by a substance called “gadolinium” — a contrast agent used in 33% of MRI scans worldwide. It’s crucial to note here that the U.S. Food and Drug Administration maintains that the substance is not harmful and that it’s a standard and safe agent used in MRI procedures.

Chuck and Gena think there’s more to the story, but it’s for us to determine whether their rationale is accurate or not. What we should take away from this is how Chuck, all but retired from a wildly successful career in Hollywood dedicated his life to fighting for his wife’s ailment. He wrote an essay on WND outlining his decision to sue 11 Big Pharma companies who “produce and distribute the drug.”

He also acknowledged his privilege at being able to afford expensive treatment and hospital stays for his wife, admitting “millions are not so fortunate.” There’s a lot of controversy surrounding his allegation against these Pharma companies, but there’s something to be said about a man who is willing to do whatever it takes to ensure his wife’s safety and well-being.

I’ve given up my film career to concentrate on Gena, my whole life right now is about keeping her alive. I believe this issue is so important.

Chuck Norris to Good Health via The Mirror

He couldn’t bear to see Gena suffer and invested tons of valuable resources into rectifying what he deems as a massive issue in the healthcare system. For a man who’s developed a reputation for being tough, gritty, and immensely macho, it’s actually delightful to see his thoughtful, loving side.

At 80, Chuck is a doting husband, father, and grandfather. He has thirteen grandchildren from five kids, including a daughter he didn’t know he had until she reached out to him via a letter at age 26. He and his wife live at a ranch near Navasota, Texas, where they produce bottled water and donate a portion of the funds towards the environment and Kickstart Kids.

Expectations can be deceiving

A lot of people had assumed Chuck Norris to be a certain kind of man — serious, unyielding, callous — based on the memes and the one-liners. But there’s a compassionate and emotional man behind the facade, someone who cares immensely for his family and will do just about anything to ensure their wellbeing.

We should be mindful of the stories we hear about others and actually take the time to verify them in our own time. Some of the expectations will be proven correct, but some expectations will be nothing but exaggerations. You can’t evaluate Chuck Norris’ career without taking his sacrifices into account. Similar, you can’t judge anyone’s character, choices, and struggles — those are the necessary truths that’ll reveal someone’s true character.