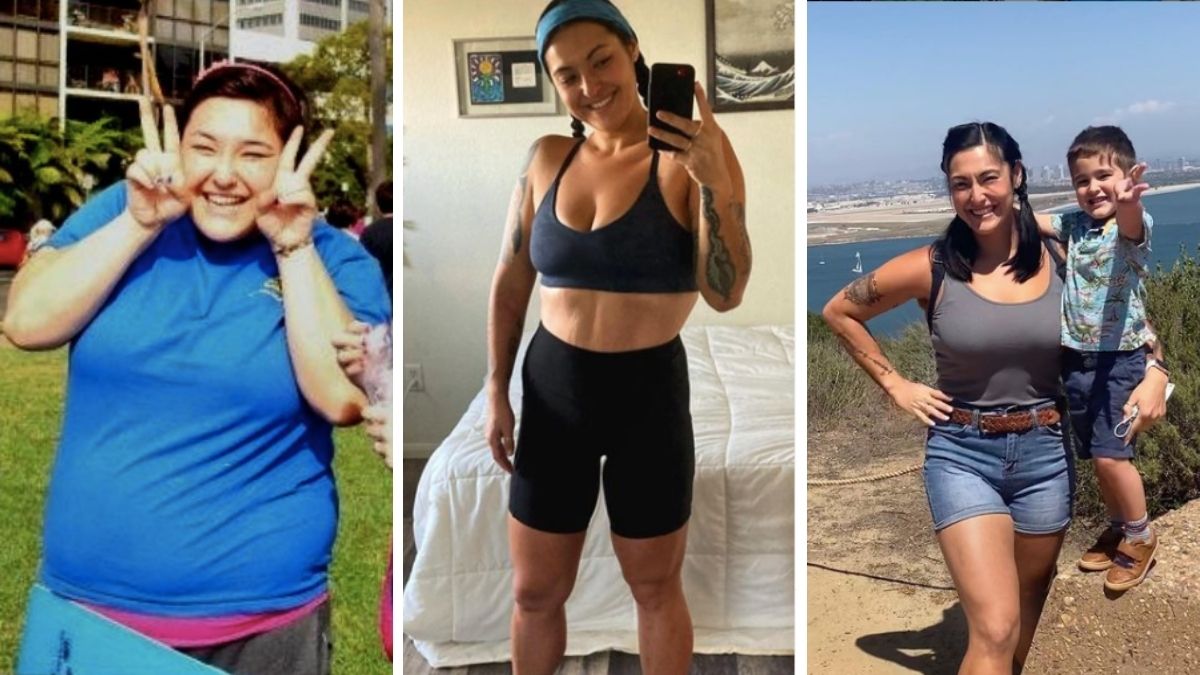 Slow and steady tends to win the race, especially when the race is a marathon. In life we tend to want “quick fixes” to our problems, but those easy fixes are often unsustainable solutions. However, we can find out over time, that if we do not institute positive patterns of behavior in the place of negative ones, we will often just keep spinning our wheels with little to no results.

That was the case for Angela Colabuccia. Angela was an emotional eater who would eat often out of boredom. Angela tells POPSUGAR, “I couldn’t even run a mile in high school without stopping. I hated exercise and loved junk food.”

After a bad breakup at the age of 23, Angela wanted to make a change and get physically fit, but she would lose weight and gain it right back. The yo-yo dieting went on for years until Angela became a mother.

Becoming a parent can change you in many ways. One thing that tends to change when you become responsible for another sentient being are your priorities. When Angela recognized that she needed to be fit to keep up with her child she began her transformation journey.

At age 27, Angela weighed 288 pounds. It was then that she made the decision to overhaul her lifestyle.

Angela set out with an ambitious goal

Over the next two years, Angela Colabucci would lose 123 lbs by switching to a low-carb, high-protein, no sugar or refined carbs diet. She didn’t count calories at first but then eventually began tracking 1,800 calories a day, allowing space for a bi-weekly cheat meal.

In a day, Angela might have eggs or low-sugar yogurt for breakfast and meat or fish with a lot of vegetables for lunch or dinner. In between however, Colabucci snacks on peanut butter, cheese, lunch meats, Atkins treats and more vegetables!

As far as working out at the gym goes, Angela keeps it simple saying, “I follow a rule of never skipping more than one day in a row.” She goes to the gym four times per week and spends her time running and weight training.

Angela reveals, “My boyfriend signed me up for the Tough Mudder without letting me know, and I fell in love with it!” Colabucci enjoys the bragging rights and camaraderie from having participated in the highly arduous obstacle course endurance event.

A chain reaction of changes

Since losing over 100 lbs in two years, Angela has noticed certain differences about her life post weight loss.

For starters, she says, “I can put a hairband around my wrist without it cutting off circulation.” Angela adds, “I wear a size 9 instead of 10.5 shoes since my feet aren’t so swollen.” And finally, Colabucci says, “I can buy normal bras at Victoria’s Secret! I used to have to special order size 42DD, but now I can get 36Ds.”

Angela keeps her momentum by signing up for more obstacle races, witnessing how her body has changed, fitting into straight-size clothing and being motivated by her son.

As far as words of wisdom go, Angela encourages others to pursue the path of living a healthy lifestyle. She says, “Don’t give up; it really is a struggle every day, but the end result is so worth it.”

Angela notes, “Learning to love myself has been the biggest reward!”

Angela Colabucci has adapted to her new way of life and explains, “I still love all the food, but I have learned how to integrate the cravings into my lifestyle and way of eating and working out.”

Nothing comes without sacrifice

Angela knew that in order for her to lose the weight (and keep it off), she was going to have to make some serious lifestyle changes. As she says, she is presented with challenges every day but she overcomes those obstacles because the results are worth it.

As we take on different roles throughout our lives we gain wisdom and shift our focus accordingly. When Angela became a mother, it became clear to her that her health was an issue, and so she addressed that issue through nutrition and exercise.

Dandapani’s Life Advice Will Change Your Future (MUST WATCH)
The Powerful Truth Behind Janet Jackson’s Complex Relationship With Her Father
The Ultimate Pump Up Song! “MAXIMUM” (Official Lyric Video) Fearless Motivation
The Cure Isn’t Always The Answer
This Is Why You Should Stop Giving A Fuck